Inspired by the Natural History Museum’s ‘Whales: Beneath the Surface’ exhibition, featuring incredible illustrations from Sarah Maycock, we want to put the spotlight on the artists depicting London scenes.

Illustrator agency Handsome Frank was set up in 2010 by cousins Jon Cockley and Tom Robinson. The agency has grown exponentially over the last eight years and the pair now represent 35 illustrators across the globe. Handsome Frank also produces its own publication, Frank, which we love! Their roster includes some of the finest contemporary artists on the planet, including Maycock, Thibaud Herem, Jan Kallwejt and Emma Kelly.

These four illustrators have represented London in their work in various ways, be that a map, drawings of famous landmarks, or commissions from London galleries and museums in Maycock’s case. 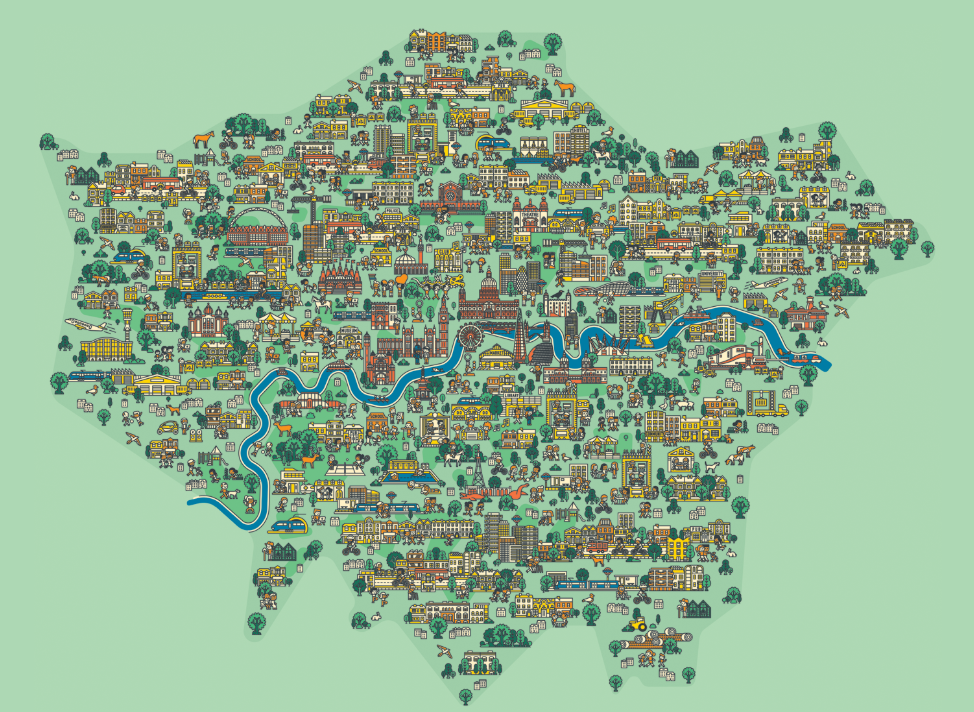 Jan Kallwejt is a Polish illustrator and designer. Before working as a freelance illustrator, Kallwejt studied advertising and worked as a graphic designer and art director for agencies in Warsaw and Hamburg. Following this, he was based in Barcelona for five years before settling in Warsaw once again. Here he runs a studio and takes commissions for illustrations from clients all over the world.

What makes Kallwejt’s works distinctive are his incredibly detailed graphics, completed in a vibrant juicy, palette. He says that his ‘meticulous finish and cheerful vibe’ makes his work universal.

“I’m inspired by naive art and pop culture. Over the years, magazines such as Newsweek, Forbes or Financial Times share place on my client list with brands like Honda, Sony or Nike.” 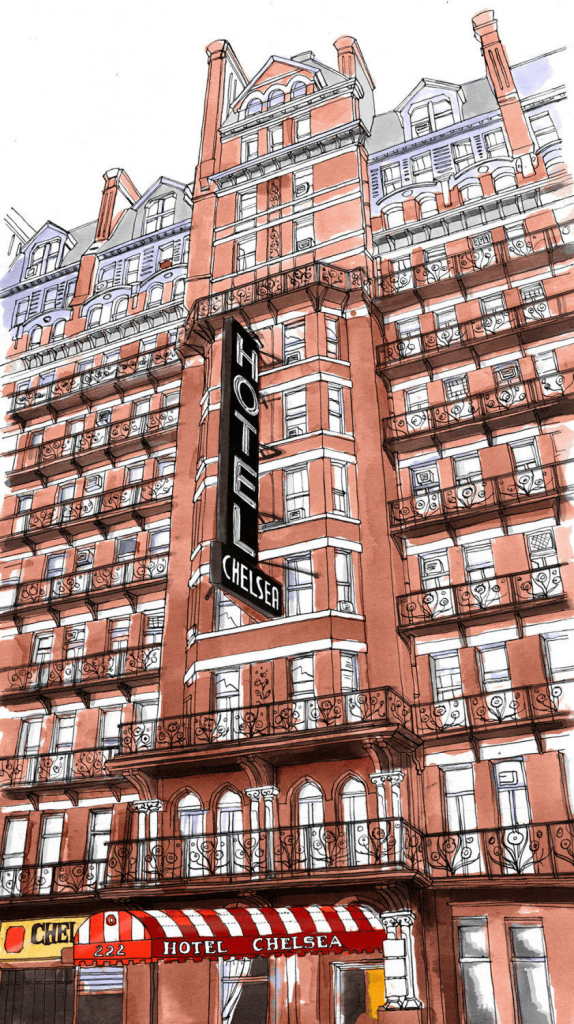 Kelly says her artistic career started when she drew things onto a wall behind her parents’ sofa, aged two years old.  She is now one of the most popular illustrators on Handsome Frank’s books and was also one of the agency’s first signings.

Kelly uses watercolour-like brush strokes and palettes to create a nice balance of precision and softness. Her depictions of London architecture and landscapes are instantly recognisable.

Focusing greatly on the tiny details, Emma can capture the realism of whatever it is she turns her eye to, be it buildings, electronics or even characterful portraits. These qualities make her ideal for clients working with luxury brands and editorial commissions. 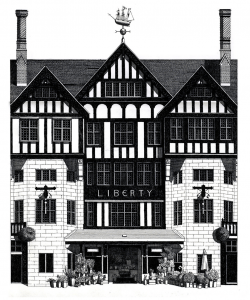 With his distinctive monochrome line drawings of London landmarks in minutiae detail, French-born Thibaud Herem’s work is easy to lose yourself in. After working in graphic design in France for five years, he arrived in the UK in 2006 to learn English and work as a freelance artist, drawing insects, birds and buildings.

Herem is well-known for his work with Liberty, depicting its iconic façade, and for his work with NoBrow, which commissioned Herem for a book of London’s buildings. He claims that London’s architecture was one of the most appealing aspects of the city and the main reason he wanted to work here, rather than in France. Herem has never trained as an architect but loves studying and drawing buildings in great detail – each piece of his work is hand-drawn and can take weeks to complete.

“Everything about London was attractive to me before I moved here and its architecture was one of the most appealing aspects… after 10 years here, I still discover hidden gems every week. There is a very distinctive aspect to architecture in London; it is [messier] and less united than cities like Paris or Rome, but its heritage is cherished with pride.”

Hastings-based illustrator Sarah Maycock has become one of the most popular illustrators on Handsome Frank’s roster. After studying Illustration Animation at Kingston University and having been an It’s Nice That Graduate in 2011, she has carved a career out of painting animals, landscapes and still life.

Maycock, like Herem, was also commissioned by Liberty London and was the creative mind behind their hugely popular advent calendar 2018. 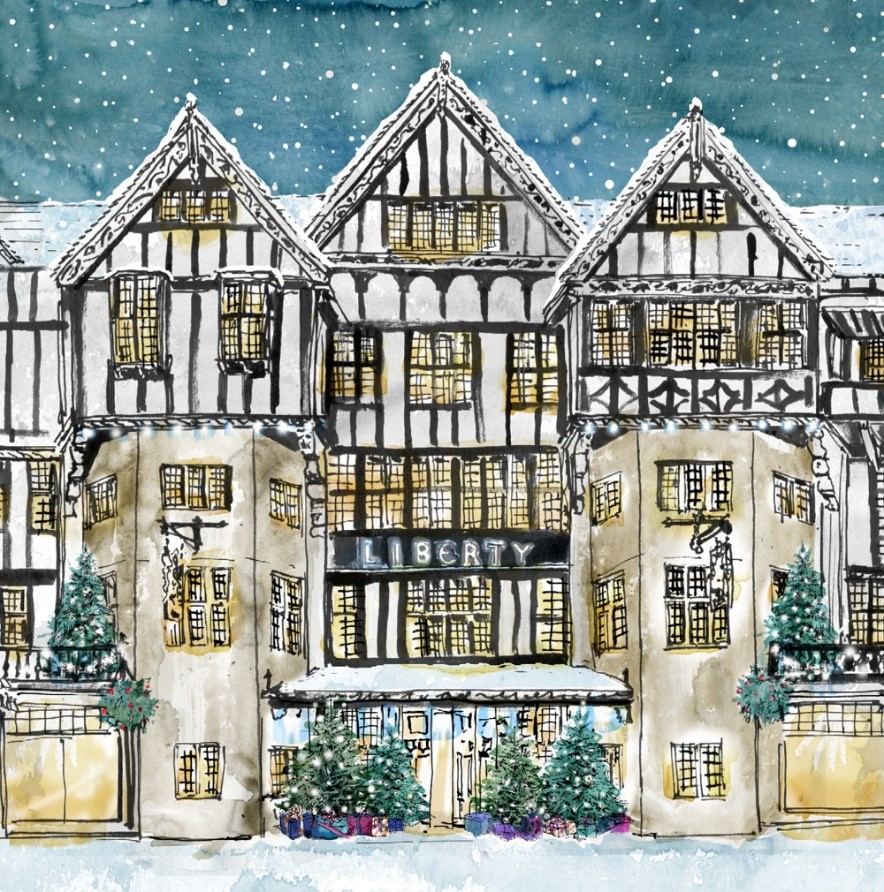 Maycock has also worked intensely with animal, since being inspired by nature documentaries such as Frozen Planet by David Attenborough.

Her unique ability to capture a creature’s characteristics or the forces of nature in simple swoops of ink has made her work a sensation. So much so that her famous image of a sitting bear was the best-selling print at Somerset House’s Pick Me Up in 2012. 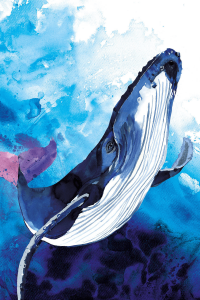 In the winter of 2016, Sarah was commissioned by London’s Natural History Museum to illustrate a long list of whales, ranging from the Blue Whale to species that are now extinct. Each painting had to go through a complex sign-off process involving specialist scientists to make sure they were anatomically correct. Maycock’s artwork was approved and could be seen in adverts all over London for the exhibition.