London – one lengthy history that tells a global story of innovation and resilience! There’s hardly anything this city hasn’t withstood; from invasions, to plagues, to fires, to bombings. Today, it holds the status of one of the world’s foremost economic powerhouses according to the Arcadis’ 2018 Sustainable Cities Index.

And yet, there has never been a better time to take the lessons of the past and combine them with the voices of the city’s exceptionally diverse communities to tackle climate change – an issue that will eventually confront every Londoner!

Tune in to any news outlet and you’ll find it near impossible to dodge apocalyptic headlines and eco-friendly lifestyle tips. With London’s first-ever Climate Action Week (LCAW) coming up at the beginning of July, there’s no time like the present to look at where we are now and the unique role the capital plays as a leading international hub in tackling climate change.

Best in the World?

London is setting the benchmark for a bold and ambitious future. Around 80% of the city’s emissions come from burning fossil fuels to power and heat buildings, while the rest comes from transport. In response, the Mayor of London, Sadiq Khan, has set a target for London to become a “zero-carbon city by 2050”. 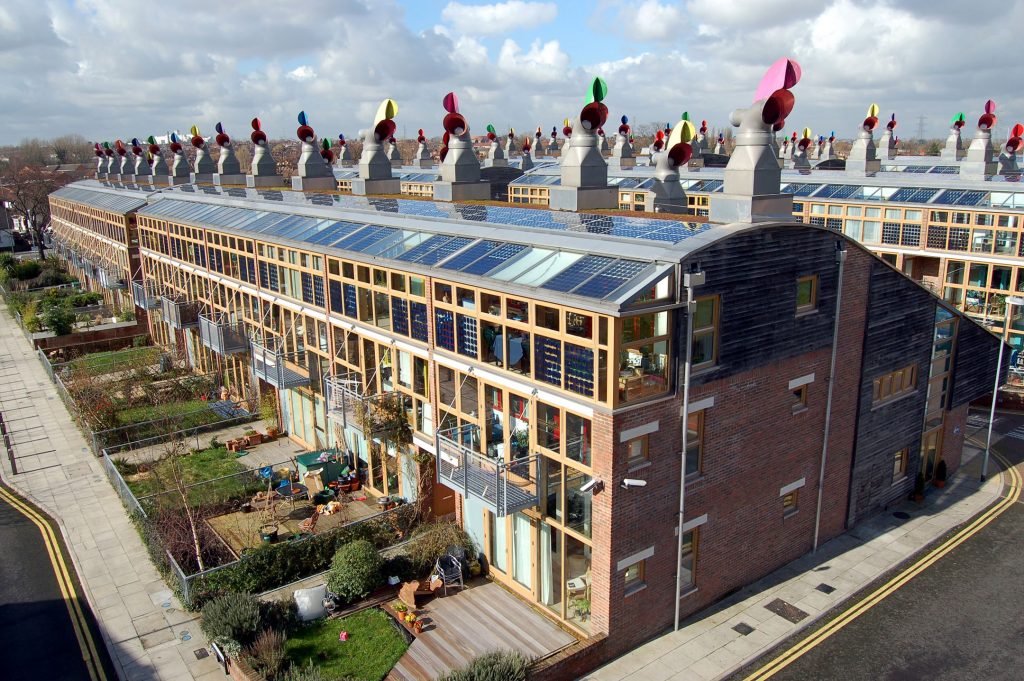 BedZed, London is the UK’s first ever large-scale eco-village. Photography by Tom Chance licensed under CC BY 2.0

That is not to say the capital hasn’t been proactive! It is already viewed as one of the most sustainable cities in the world, being voted 5th most sustainable city in 2016 and climbing the ranks to first place in 2018. However, there is a still a lot of work to be done if we’re going to deliver on promises and pledges like those made in the Paris Agreement, which should eventually carry us into a healthy, equitable and prosperous future.

Since the launch of the Environment Strategy consultation, the Mayor has established his £9 million Greener City Fund to improve and create new green spaces, and to reduce single-use plastic bottles in London. One of the commitments is the delivery of up to 20 new water fountains across the city, strategically placed in busy locations including Carnaby Street and Liverpool Street Station.

For the past 25 years, Trees for Cities has been championing a greener capital. Though the charity has its roots in London, they’ve now taken to planting trees at a national and international scale. Ever eager to get stuck in with local communities, Trees for Cities has amassed over 80,000 volunteers since 1993, all looking to foster a lasting change for the better in their neighbourhoods, whether that’s through revitalising streets and parks, or bringing new gardens to housing estates and schools. The results already more than speak for themselves, as the organisation has planted an impressive 1,000,001 trees. 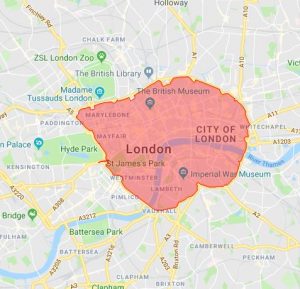 Londoners are being encouraged to use their bicycles more. The city already has a network of cycle superhighways, and the number of these is set to increase. In March of 2018, Khan also introduced the T-Charge – a £10 surcharge per day on older, more polluting vehicles traveling in the centre of London. The end game is to extend the reach of the city’s current ultra-low emission zone to neighbouring boroughs from 25 October 2021, with the new boundary being capped off by the North and South Circular Roads.

Measures are also being taken to tackle many of the burning issues with London’s air supply. The London Air Quality Network has introduced two different Annual Pollution Maps, one for NO2 pollution and the other for O3. The maps show the average concentration of pollution from each gas in vivid detail, naming and shaming the areas that fail to meet their air quality targets! In addition, reports seem to indicate that the city’s rumoured ‘zero-emission zones’ will be become a reality for town centres sooner rather than later, with implementation slated for 2020, rather than the original 2025 date. It’s hoped that these policies will spur the roll-out of new electric vehicles.

London is one of few cities to demonstrate a measure of enthusiasm for sustainable buildings. Developers and blue-chip corporations are beginning to understand that sustainable development will not only provide a solution to the biggest problem facing our generation but breed far more fun and inspiring work environments.

Take the RIBA award-winning Bloomberg HQ building for instance, labelled “The World’s Greenest Office”. The design and engineering of this building are so ground-breaking, an after-work visit can’t be more highly recommended. Being pleasing to the eye and providing unlimited coffee is one thing, but Bloomberg HQ has rightfully earned a 98.5% rating on the global sustainability standard. As well as a grey water recycling system, the most eye-catching feature remains the 4,000 integrated ceiling panels which combine heating, cooling, lighting, and acoustic functions.

20 Fenchurch Street is another example of sustainability in the urban context. The building incorporates hydrogen fuel-cell technology into its framework, resembling the technology that was originally developed for the Apollo and Shuttle space missions. The result is a 6-7% drop in carbon emissions. It is also home to the UK’s largest green wall as well as a sky garden on the roof which naturally helps reduce carbon dioxide levels in the city’s atmosphere. 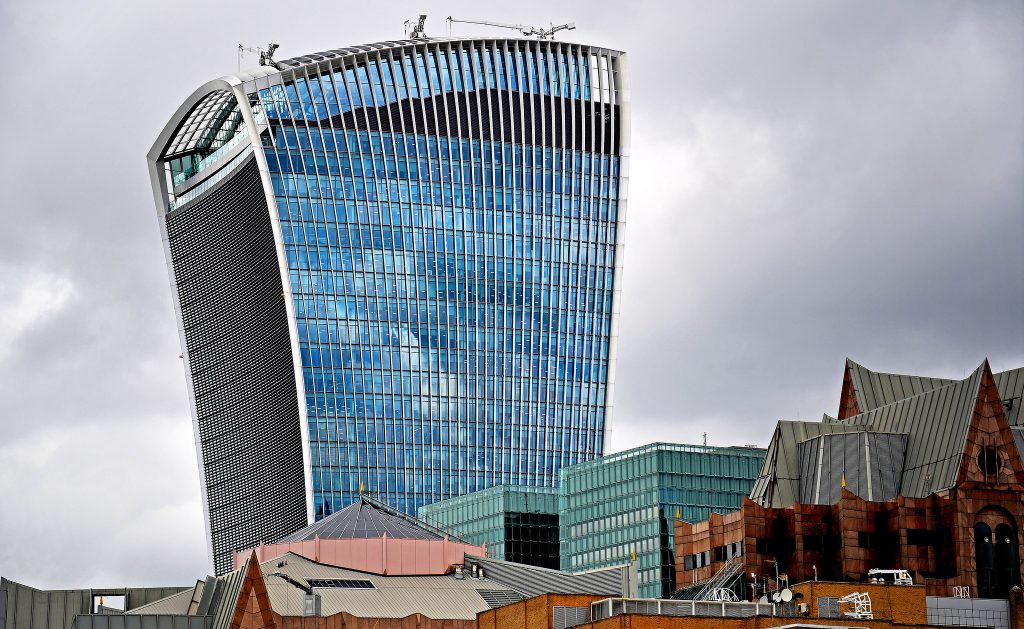 Goldman Sachs’ highly anticipated new office space will finally be ready for occupation this summer. The 1.1m square foot development in Farrington recently made it into the spotlight thanks to glowing reports of the unique “shaft of light” design that will run through the middle of the building and illuminate the trading floor. Above all, Goldman Sachs has made no delay in broadcasting the green credentials of their new address which is set to cut carbon emissions by 25%, as well as reduce water use by 40% by harvesting rainwater for their rooftop garden. 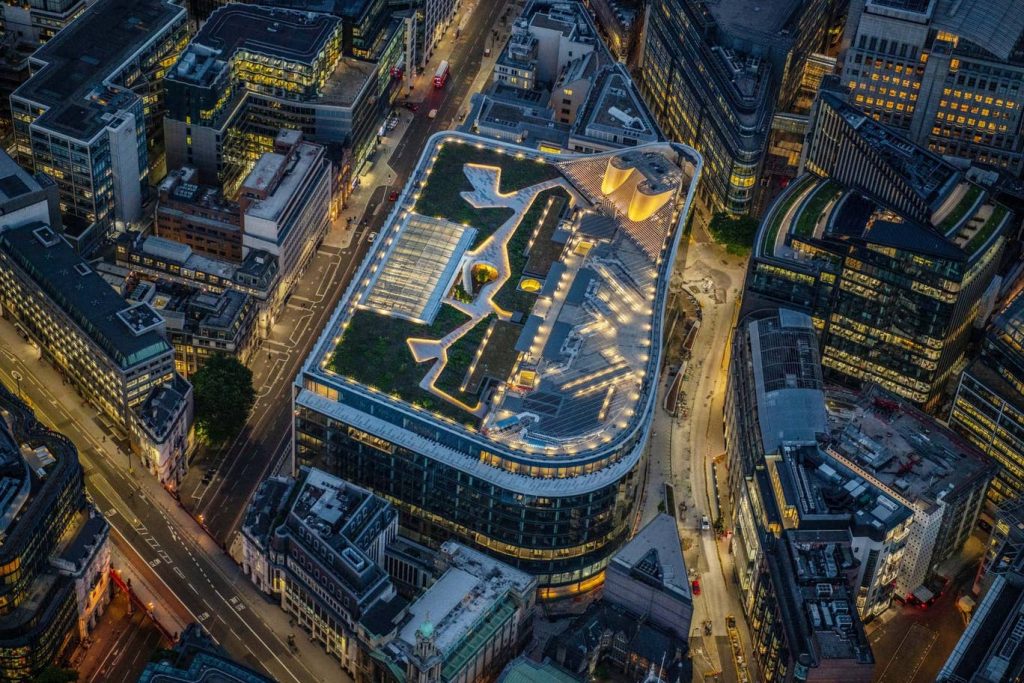 On a final note, it would certainly be a mistake to think that only London’s major office blocks are making a stand to reduce their carbon footprint. If we look beyond large-scale development schemes and the City of London, commercial businesses such as supermarkets have begun to adopt their own eco-friendly models. In Westfield Stratford City, the local Waitrose uses low carbon lighting, and sends all its unusable food waste to an anaerobic digestion plant where it can be converted into energy and put back into the national grid.

Environmental issues are at times complex, misunderstood, and even worse, ignored and seen as someone else’s problem. Recently, however, London has seen a combination of growing awareness of climate risks by financial actors, led by the Governor of the Bank of England, ongoing public protests and civil disobedience campaigns, and truly disconcerting freak weather conditions. It is unsurprising that in recent months leaders and civilians are forced to wake up and understand just how much their current decisions will impact the future.

How do you think we can make London more sustainable? Share your thoughts with us below:

https://boutiquelondon.com/wp-content/uploads/2019/09/serpentine-pavilion-1.jpg 800 800 Boutique London Boutique London https://boutiquelondon.com/wp-content/uploads/2019/09/serpentine-pavilion-1.jpg September 6, 2019 October 21, 2019
social
Login to Boutique London
Reset Password
Enter the username or e-mail you used in your profile. A password reset link will be sent to you by email.
Social media & sharing icons powered by UltimatelySocial