London’s Millennium Bridge is just under 20 years old, yet despite its youth, the structure has firmly cemented itself as one of the most identifiable landmarks in the city. The groundbreaking structure was designed by world-renowned architects Foster and Partners, in collaboration with sculptor, Sir Anthony Caro and engineering company, Arup. The project resulted from a competition held by Southwark Council and the Royal Institute of British Architects in 1996. 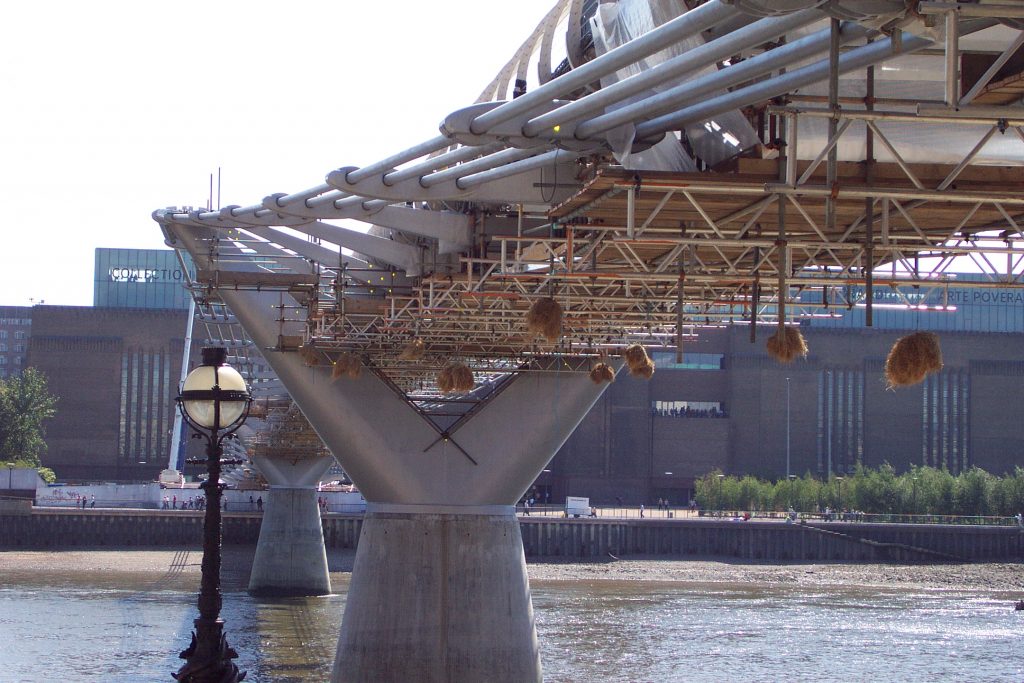 Underside of the Millenium Bridge while it was still under construction, Jack Hill / Millennium Bridge / CC BY-SA 2.0

The Millennium Bridge is the capital’s only pedestrian footbridge and the first new crossing to be built over the Thames for more than a century, since Tower Bridge was built in 1894. This iconic bridge is a significant component in London’s pedestrian infrastructure, encouraging activity along the embankment and creating new routes into Southwark. Ultimately, the bridge has played a key role in the last two decades at connecting London’s riverside locations and helping establish the vibrant culture along the River Thames. 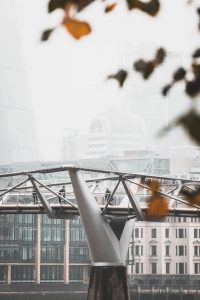 Close up, it is a wonderful assembly of almost organic components, that provide an ever-changing composition which reminds one of a 21st-century version of something which could be seen in the natural history museum. A truly great addition to this historic river and city. RIBA

Spanning 320 metres, the milestone project pushes the boundaries of technology enabling people walking across it to have uninterrupted views of the city whilst preserving the sight lines of the surrounding buildings. As a result, the bridge has a ‘uniquely thin and skeletal profile, forming a slender ribbon of steel which arcs effortlessly low above the water’. The Structural ingenuity of this suspension bridge, also described as ‘the blade of light’ across the Thames, reflects the capabilities of architecture and engineering in the 21st century.

The Millennium Bridge today and its surroundings

Today Millennium Bridge is firmly positioned as a top London Landmark, a vital organ of our city’s infrastructure which carries pedestrians, commuters and sightseers across the river between St Pauls and Tate Modern every day. Unfortunately, what many forget to do is to take a moment to be a little extra observant. Did you know that there are an estimated 400 tiny works of art on the Millennium Bridge itself? 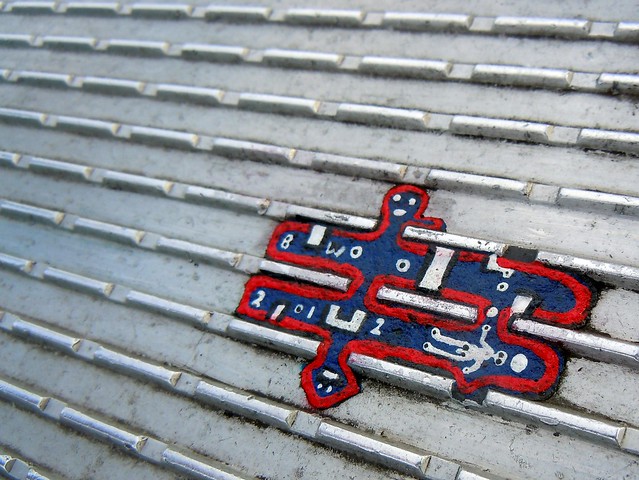 These minuscule masterpieces are painted onto a rather unique canvas: chewing gum! Created by Ben Wilson, this artist has dedicated his creative efforts to systematically turning over 10,000 trodden-in chewing gums, that pepper the streets of London, into miniature canvasses for over a decade.

He has perfected an extraordinary technique using a blowtorch and layers of acrylic paint with lacquer to make tiny, shining works of art at our feet. His subject matter ranges from London’s scenery to brightly coloured abstract patterns and fictional creatures.

Away from these micro treasures fused into the structure, the activity that constantly surrounds the bridge has helped create an ever buzzing and vibrant atmosphere in Bankside, resulting in it being the capitals favourite promenade. The link it forms between the two sides of the river has forever changed and enhanced the community now offering a well-connected, bustling location.

The sites either end of the bridge play host to a wide variety of artists and entertainers every day making it a hot spot for tourists and sightseers. In particular, thanks to the Tate Modern and The Globe Theatre, the southern entrance of Millennium Bridge is renowned for its creative and artistic culture.

Upcoming events in Bankside close to the Millennium Bridge include: