The Culinary Vibrancy of Borough Market

The Culinary Vibrancy of Borough Market

For decades, visitors from far and wide would flock south of the river to enjoy what is Borough Market. This food hall is so iconic that it also happens to be an eternal hotspot for the local residents, office workers and London’s Sunday brunch enthusiasts. 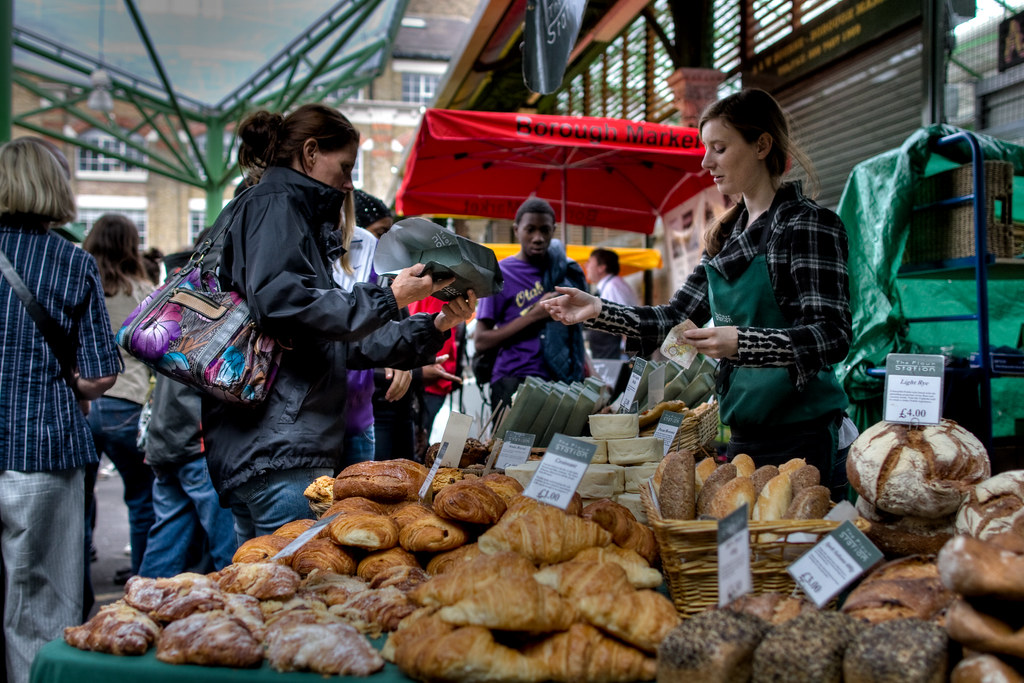 “Borough Bakery” by David-White is licensed under CC BY-SA 2.0

This magnet for all types of cuisine has endured and flourished for over 1000 years, making it one of the oldest in the world. It has endured Viking invasions, the bombs of the Second World War and the decline of the fruit and vegetable wholesale in the 80s and 90s, yet it continues to flourish and impress.

Borough Market, originally known as Southwark Market, started out selling a wide range of produce on the busy highway at the foot of London Bridge. Records regarding its beginning vary, but generally the agreed date is 1014. For centuries, it was in fierce competition with the traders of the City of London, who eventually lobbied King Henry IV to extend the City’s jurisdiction to include Southwark’s market in 1406.

The market’s survival was in jeopardy when a huge fire swept through Borough in 1676, destroying the market house. Though the City made it illegal to rebuild on grounds of its congestion of Borough High Street, residents of Southwark successfully pressed for a new, independent market on the western side of the high street. This is where Borough Market as we know it is located. 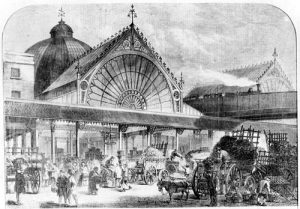 Borough Market, circa 1860. From the Illustrated London News?

In the 19th century, it became one of London’s most important food centres due to its vital location near the riverside wharves of the Pool of London, and the chaotic platforms of Waterloo Station.

The market and the surrounding streets also have a claim to film stardom. It has featured in British classics such as Bridget Jones’s Diary, Lock Stock, Two Smoking Barrels and Harry Potter and the Prisoner of Azkaban.

Borough Market, historically, has been the principal supplier of fruit and vegetables to retail greengrocers throughout London. Today, it continues to attract a multitude of food traders, both British and international. One of the best grocers in the UK, Turnips, is known for its seasonal and specialty fruit and veg originating from farms around Britain and overseas.

Neal’s Yard Dairy provides a tasty insight into locally matured British and Irish cheeses, while you can experience some of the freshest sourdough and pastries in London from the Flour Station bakery.

It is over the last thirty years, however, that Borough Market has truly put its stamp on London’s food scene. With the arrival of food pioneers such as Brindisa in the 1990s, a renaissance began that attracted all manner of diverse street foods to the 1000-year-old market.

Consequently, it now boasts a rich variety of cuisines from across the world. Some of the tastiest pasta outside of Italy can be found at Padella, although one will have to queue for a little while to experience its mouth-watering Pici cacio e pepe. The roasted pork belly sandwich from Roast To Go is a cracking introduction to one of the UK’s most well-known dishes. And with El Pastor’s tacos, made with 24 hour marinated pork and caramelised pineapple, you could almost be forgiven for thinking you are in the bustling streets of Mexico City.

That is not to say Borough Market doesn’t accommodate for more exotic tastes. Arabica Bar & Kitchen’s menu is a sensational exploration of the fresh flavours and outstanding hospitality of the Levant. Some of London’s best Turkish coffee is served here, while vegans can indulge in their mouth-watering roasted cauliflower with tahini sauce and pomegranate. What’s more, it is open seven days a week!

For those still looking for a taste from further afield, Gujarati Rasoi’s mother-and-son team work to recipes that have been handed down through many generations in Gujarat, India. Their stunning vegetarian dishes use only the freshest ingredients and whole spices to create the best cooking sauces, chutneys and chai spices. It is certainly one not to missed! 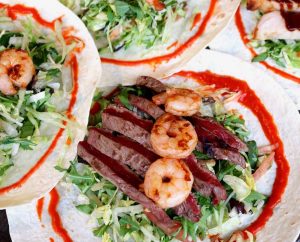 Soul Food takes its customers on a fabulous journey through Caribbean, African and Central American cuisine, combining strong earthy tastes with traditional cooking styles. Their chicken pelau will transport you to the sun-kissed beaches of Trinidad, while their soul food combo wrap is the perfect grab-and-go snack.

With an Act of Parliament from 1754 declaring Borough Market as ‘estate for the use and benefit of the local community forever’, its future as a haven for foodies remains secure for decades to come.

https://boutiquelondon.com/wp-content/uploads/2019/08/Tibits-vegan-buffet-in-Bankside.jpg 1080 1350 Boutique London Boutique London https://boutiquelondon.com/wp-content/uploads/2019/08/Tibits-vegan-buffet-in-Bankside.jpg August 23, 2019 October 28, 2019
social
Login to Boutique London
Reset Password
Enter the username or e-mail you used in your profile. A password reset link will be sent to you by email.
Social media & sharing icons powered by UltimatelySocial