Over the past decade, street art has taken the world by storm! It has certainly evolved beyond its urban predecessor graffiti, which was originally considered an act of vandalism mostly found on open-air railway tunnels and metal shutters of less privileged postcodes. Today, it has become a much more widely appreciated art form, encompassing everything from the picturesque to the witty, often while making bold and unfiltered statements about modern society. On top of being sought-after by some of the art world’s biggest establishments, it has captivated corporations looking to deploy a more creative marketing solution into the urban landscape.

Above all, street art can make an impressive impact on a neighborhood, contributing to its energy by attracting more people and businesses to an area. Indeed nowadays, even street artists leaving their mark on the walls of a property could result in the owner gaining a small fortune post-sale.

London is arguably home to one of the biggest and best collections of street art in the world, and for decades South Bank has served as a giant canvas for this particular variety of art. With some of the biggest legal writing spots in the country, this street art oasis is a place to discover emerging talent and spot a piece or two by some leading legends (e.g, Banksy).

Street art tours have rapidly become a popular London experience, but we would like to take this opportunity to introduce you to South Bank’s alternative map ourselves. Dedicate a day to exploring the south of the river, experience the essence of this urban sub-culture and visit these exceptionally inspiring and photogenic hotspots.

Portrait of a Playwright 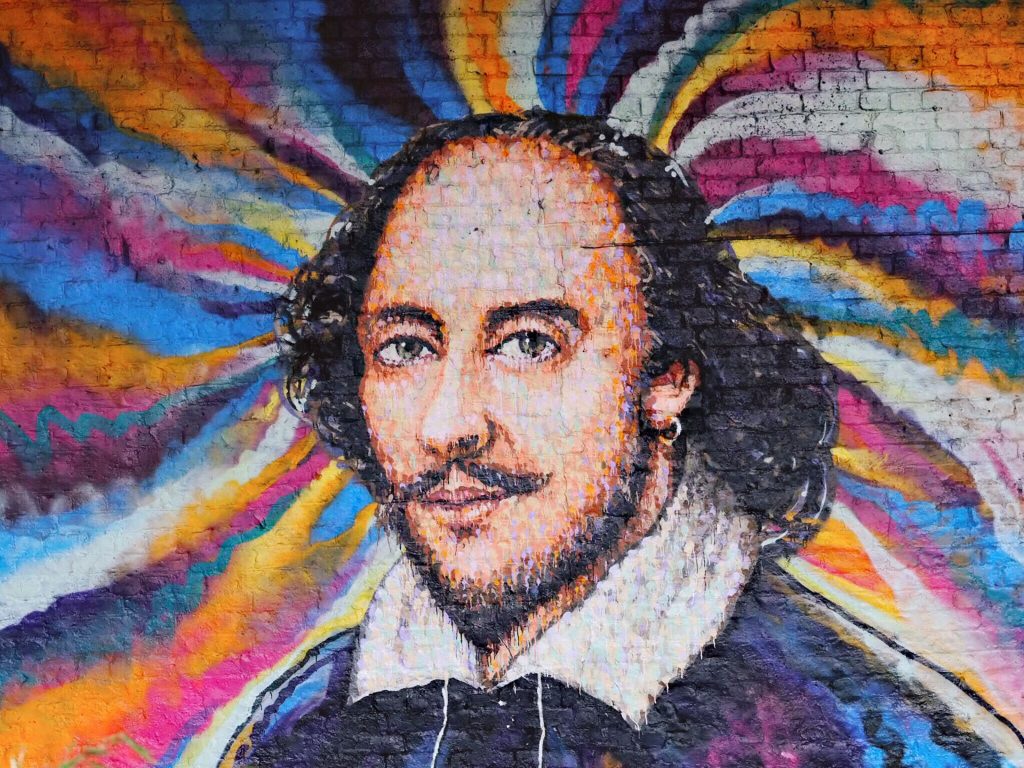 Shakespeare by Mark Usunger / CC BY 2.0

Want to really delve deep into the soul of a neighborhood? With street artists becoming vastly aware of their responsibility in the urban transformation process, many prefer to take the opportunity to reflect the history and context of a place as opposed to creating purely decorative work. London’s infrastructure companies have even shown their support, with Network Rail granting permission for this particular mural.

Reported to be the most famous piece of street art in Bankside, this colorful portrait of the Bard can be found on Clink Street. Right in the heart of Shakespeare territory, it is located around the corner from the Globe and Rose Theatres, as well as the location where his brother was buried in Southwark Cathedral.

This psychedelic tribute by Australian artist, Jimmy C has graced many Instagram accounts as well as travel and lifestyle blogs. Originally from Adelaide, Jimmy C has already made a solid mark on the UK’s street art community, especially after the completion of his David Bowie portrait in Brixton. 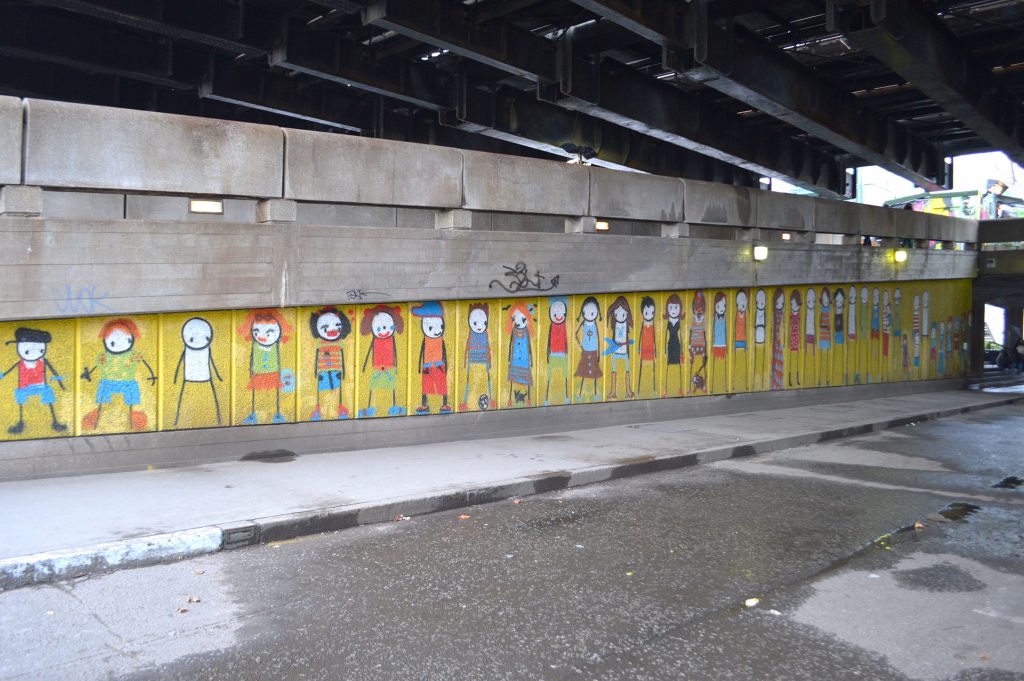 Bridges have a long-standing history of attracting both graffiti and street artists over the years, but this particular bridge has enjoyed the privilege of being painted by the Stik, another leading name in London’s street art community, renowned for his light-hearted, minimal etched figurines. Having brightened up the concrete in his signature bright yellow tone back in 2013, the British artist painted an entire crowd of his trademark stickmen before inviting amateurs to contribute and customizing them to their tastes.

Stik had always admired South Bank for its commitment to encouraging artistic freedom, with many street artists coming to the area to express themselves. In his eyes, the area has “become part of the institution of street art”. 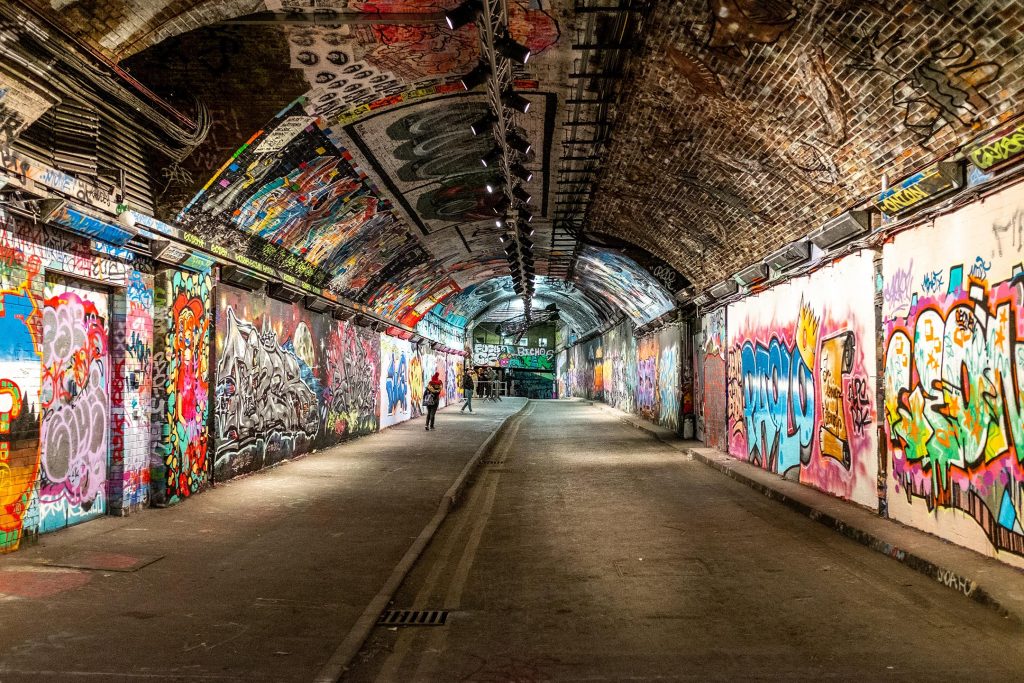 Well hidden from view, this tunnel is frequently described as an absolute nightmare to find! However, this professionally lit 300-metre-long wall is certainly worth the visit. Being London’s largest street art tunnel, it is a mecca for talent from all over the world who come to leave their mark on the city. It is also a location where painting events have been held by the godfather of street art himself! Banksy’s 2008 “Cans Festival” was just the right catalyst to make this spot a street art phenomenon.

As it is not a protected site, the Leake Street tunnel is a constantly changing canvas, meaning that you will undoubtedly discover something new every time you decide to swing by this wonderland. The popularity of the tunnel has led to the addition of a well-curated collection of independent restaurants and bars, which have become regular pitstops for the capital’s art-crowd.

South Bank Skatepark (aka The Undercroft) 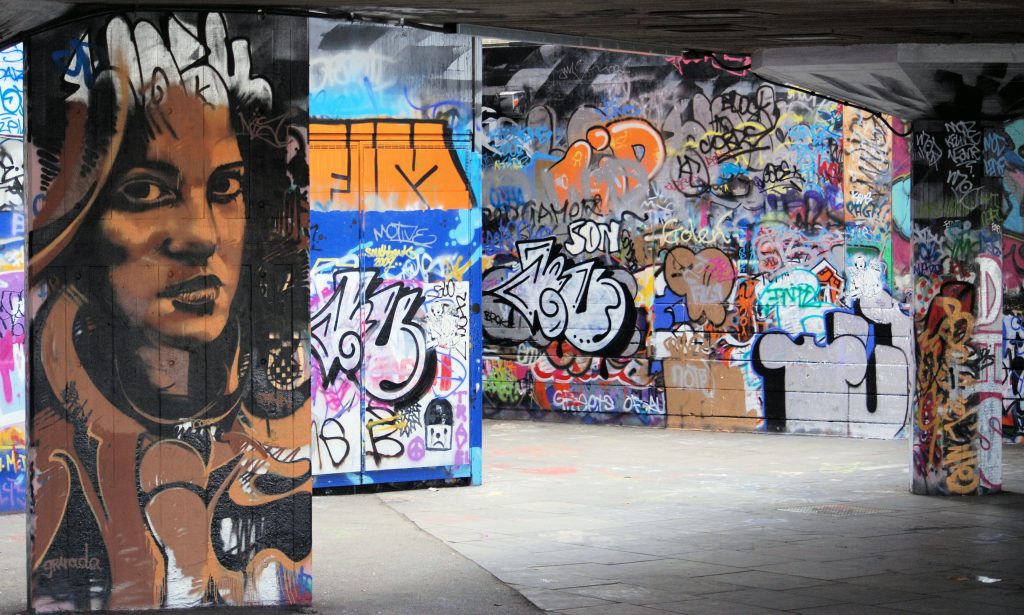 If you have seen the 2005 documentary “Rollin’ Through the Decades”, then The Undercroft should certainly ring a bell. But if examining the park’s love-hate relationship with South Bank’s developers is not your cup of tea, then being a 90’s kid raised in London is enough to be familiar with this sacred colony for graffiti artists and skateboarders.

Located under the Queen Elizabeth Hall, this spot has become especially iconic with the city’s writers, skaters and independent creatives. This free creative space has further made a name for itself when plans to redevelop this corner were met with opposition that was fierce enough to make national headline news.

Some of the biggest names in street art are regulars here but just like the Leak Street Tunnel, no artwork there is permanent. Even when Robin Rhode was commissioned to the area with a sleek new paint job to coincide with his exhibition at the Hayward Gallery, it only lasted a few days before being retagged.

Did we miss one of your favourite street art spots? Share it with us on social media or in the comments below1